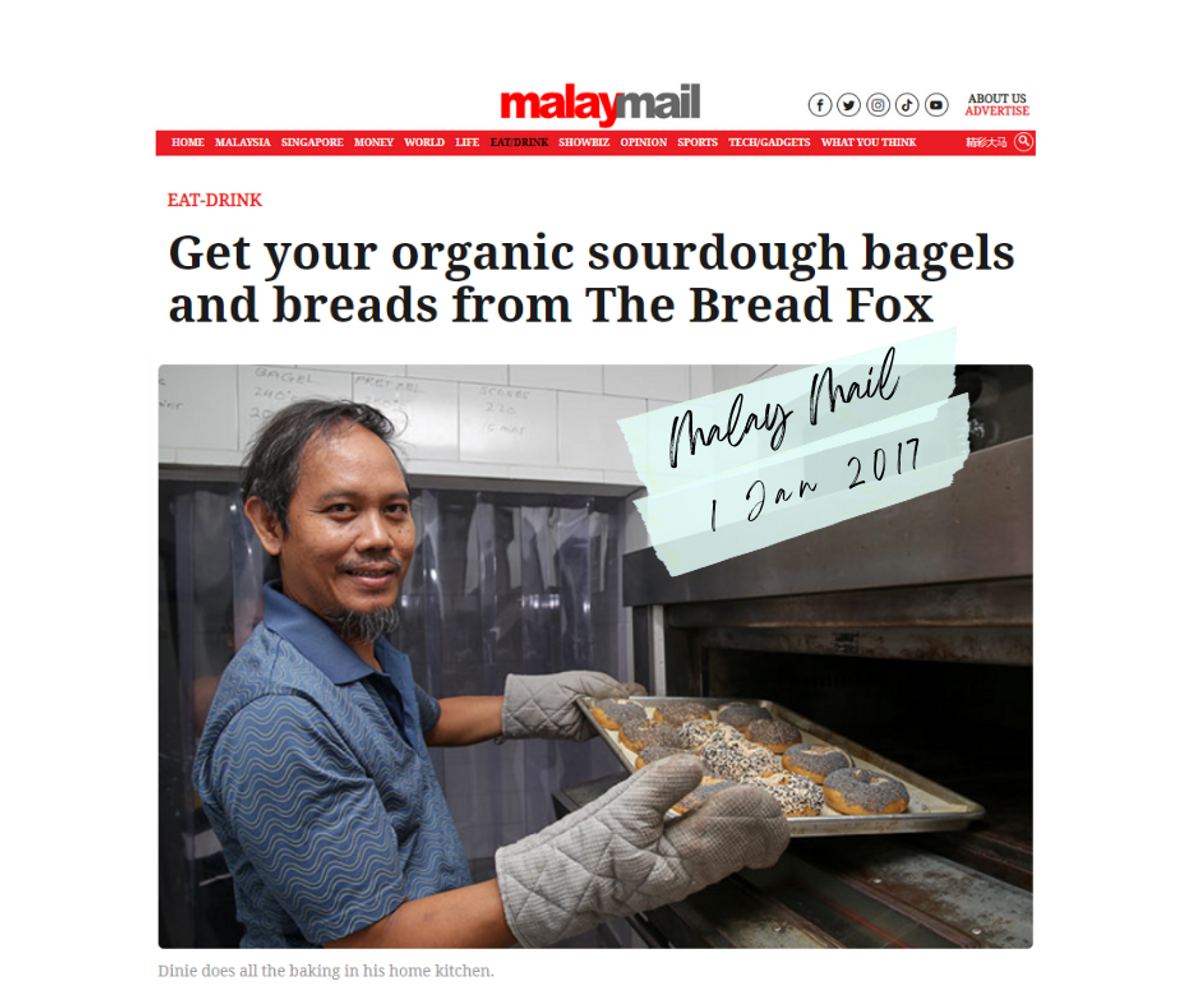 When we first started on 16th September 2016, we didn't think that we would get noticed, one day, we received a call from Vivian Chong from Malay Mail wanting to do an interview with us! I remembered that Kuala Lumpur, Malaysia was raining cats and dogs and we had a mini flood due to a clogged drain near our home bakery.

Below is some excerpt I copied and pasted here, do read the full article at the link below ya! (https://www.malaymail.com/news/eat/drink/2017/01/01/get-your-organic-sourdough-bagels-and-breads-from-the-bread-fox/1283519)

KUALA LUMPUR, Jan1 — “Now, I am literally putting bread on the table!” says Nordinie bin Mahat, or Dinie, in his newly-renovated home kitchen that is the base of The Bread Fox, a micro bakery he started up with his wife Almasruza Putri binti Mohamad Jajuli (Ruza) that specialises in organic sourdough breads.

The name has no particular meaning, although Ruza admits to being a fan of television series The X-Files’ main character, Fox Mulder.

Just a few months old, The Bread Fox currently only has a few items on their menu — bagels (besides plain ones, there are four variants), cranberry raisin scones and brioche."

From selling among friends and online, they have now moved to setting up stall at Taman Rekreasi Lembah Kiara in Taman Tun Dr Ismail four days a week, including weekends.

The couple decided that it was more feasible to build their own kitchen, and so they converted a room in their house that was actually meant for the twins. It’s still a work in progress; the kitchen is sparse but practical for their needs.

The jovial couple are clearly enjoying this new venture of theirs, even though it’s not without its challenges and risks.

For one, they’ve moved away from using commercial yeast and replaced it with sourdough that they ferment themselves. Sourdough, says Ruza, is kinder on the gut so most people don’t have trouble digesting it. “My mother-in-law can’t take commercial breads, they cause bloating and other issues. But she has no trouble eating the breads that we bake,” Dinie adds.

But the making of sourdough itself can be a temperamental process, and means having to spend more time and effort to ensure consistency. The technical details involved, such as fermentation time, must be adhered to precisely in order to have stable results.

Dinie thus needs to watch the clock carefully and set alarms for every step. “At first, it was difficult to wake up on time in the mornings. But if we miss the timing, then everything goes down the drain!”

The Bread Fox uses only organic flour, organic sugar and organic salt in all their breads. “We started eating organic food after we had our twins,” says Ruza. “When we first started baking, we used regular flour but were not happy with the taste. Then we tried organic flour and we’ve stuck to it since.”

There is no egg wash used, making the bagels suitable for vegans. Instead, the crust, Dinie explains, comes from boiling the dough in a mixture of bicarbonate of soda and malt before baking, which makes the skin gelatinous and thicker.

The insides are soft enough that you can enjoy the bagels right away without toasting. In fact, Ruza and Dinie both advocate eating the bagels straight from the oven. “They have a different texture compared to toasted bagels, and are really the best way to enjoy bagels,” says Ruza.